The City of Grand Junction will close the portion of the Riverfront Trail between Banana's Fun Park and the Junior Service League Park for replacement of the asphalt with concrete beginning Monday, October 3, 2022. An alternative route is available along Riverside Parkway.

The Grand Junction area’s trail system is a key asset to both residents and tourists providing bicycle and pedestrian routes through and around the community. The city has more than 9.2 miles of asphalt trails that are more than 25-years-old and in various states of disrepair. One of the biggest concerns for cyclists is the separations that have resulted from shrinkage of the asphalt over the years. This makes for rough riding on many sections of the trails. The city is planning to replace these asphalt segments with long lasting concrete over the next three years. Where feasible, the trails will also be widened from 8 feet to 10 feet to better accommodate bikes with trailers as well as recumbent trikes.

Other trail sections identified for replacement with concrete include the Ridges, South Camp, Redlands Parkway, Junior Service League, the South Rim and Bluffs trail accesses to Connected Lakes State Park, and Las Colonias Park to Eagle Rim Park Trail. Updates on construction and detours will be provided on the city website and social media accounts. 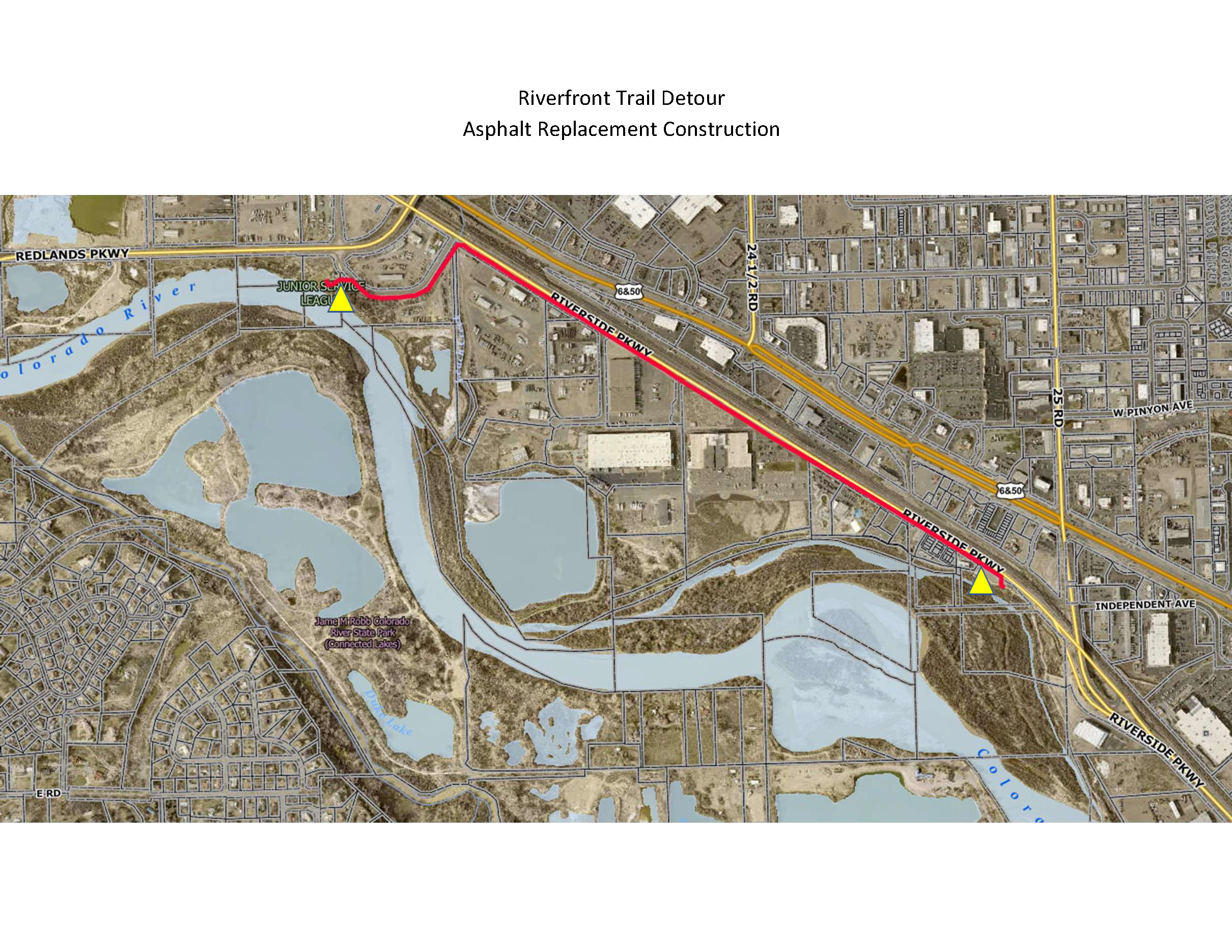 The City continues to work with Colorado Parks and Wildlife and Mesa County on securing the last two remaining properties. The City is working with the developer of a gravel operation to get early access for trail construction, while Mesa County is securing a property on the west end. Colorado Parks and Wildlife was successful in obtaining a Great Outdoors Colorado (GOCO) grant to fund the development of 100 percent of the design plans which will be complete in the spring of 2023. After securing the remaining right-of-way, construction of the $1.4 million project is proposed for 2024 with funding anticipated from the City, Mesa County, GOCO, and One Riverfront.

As part of the development of the Eddy east of Las Colonias Park, the developer was required to construct more than 1,100 feet of the Riverfront Trail. The City partnered with the developer to increase the west half of the trail to 12 feet. The City was responsible for constructing approximately 100 feet of trail connecting Las Colonias to the section constructed near the Eddy. This work will be completed in early October 2022.

The Riverfront Trail segment over the Broadway Bridge is very narrow with only 5 ½ feet between the concrete barrier and the 6-foot chain link fence. This makes it very difficult for two bikes to pass going opposite directions without slowing down significantly or stopping. The popularity of bike trailers for kids/dogs as well recumbent tricycles also makes it challenging to use this long narrow corridor. This $400,000 project proposes to reconstruct the concrete barrier 24 inches to the south and then reconstruct the chain link fence to attach to the side of the bridge deck instead of the top of the bridge deck gaining 6-8 inches. This project is subject to CDOT approval.