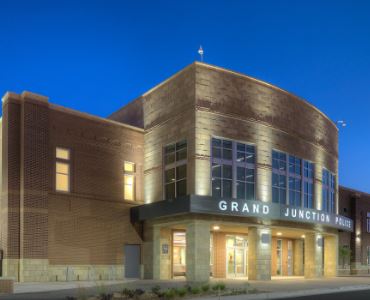 The beautiful western Colorado town of Grand Junction was founded in 1882.  When the town of Grand Junction became the City of Grand Junction in 1909, the Grand Junction Police Department was formed, consisting of our first Chief of Police, G. Burdette Welch, along with two additional officers.   As you can imagine, there have been a lot of changes since then, with some interesting highlights along the way. We no longer need the 1920s era red light on top of the 1st National Bank building that was activated for officer assistance. Technology has come a long way from the first camera the department purchased in 1949 to use at crime scenes. The Harge Drunkometer that was installed in 1956 was replaced with the Breathalyzer in 1962. And, today it wouldn't be big news to hire a female officer like it was when the department hired its first, Officer Josephine Henson, in 1975.

Today, the Grand Junction Police Department has grown from those first three officers to 142 positions authorized for sworn staff who serve our community.  In addition, the Department staffs 92 civilian employees who provide essential services such as Finance, Executive Support, Records, Property and Evidence, Crime Analysis, and Parks Patrol, as well as the Grand Junction Regional Communication Center, who provide a hub for 23 public safety agencies in Mesa County.

Grand Junction is the gateway to the mountains and canyonlands of western Colorado and eastern Utah.  Grand Junction is home to more than 60,000 residents, a number that swells to well over 100,000 during the work week. Grand Junction hosts several community and cultural events throughout the year, including baseball games at the Junior College World Series and numerous downtown events and festivals.

Our department values independent decision making and problem solving strategies. Using a community oriented policing philosophy, our department has fostered strong partnerships between our schools, faith based community, civic organizations and citizens. We strongly believe that preventing crime is a community effort and it is our role, as the Police Department, to provide the training and information necessary to help our citizens take an active part in crime fighting efforts. Every member of the Grand Junction Police Department is committed to our Mission and Vision, which are summed up by our values: Professionalism, Integrity, Compassion, Service.